Partnering with the leading Peruvian operator, Pentagol, Pragmatic Play continues its expansion on the market. The leading developer has announced the news nearly a week ago. 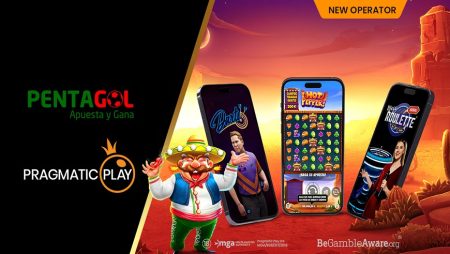 Partnering with the leading Peruvian operator, Pentagol, Pragmatic Play continues its expansion on the market. The leading developer has announced the news nearly a week ago.

And while others were enjoying the festive season, the developer has taken action, strengthening its position in the thriving Latin American market.

If you’ve been following our posts here at LiveCasino24.com, you know that only about a month ago, the leading software developer Pragmatic Play partnered with Tinbet to further boost its presence in Peru, and now, the top provider has continued its expansion by partnering with another Peruvian operator, Pentagol. The news was shared about a week ago.

This new deal only further confirms Pragmatic Play’s dedication towards conquering the Latin American market. The leading content provider to the online gambling industry has signed a content delivery deal with Pentagol, further boosting its position in the ever-growing LatAm market. Pentagol is the latest operator partner to benefit from the developer’s wide range of state-of-the-art content in the market in Peru that joined its neighbours in maintaining LatAm’s status as one of the most active globally.

Pentagol’s players will now get access to the developer’s player-favourite slots, virtual sports products, as well as top-notch Live Casino games, all of which enjoy huge popularity across the market. Therefore, Peruvian players at Pentagol will get access to recently released slots such as Fury of Odin Megaways, Reel Banks and the award-winning Gates of Olympus and Sugar Rush, alongside the wide collection of virtual sports products like Greyhound Racing, Force 1 and Horse, which are detailed 3D presentations of a range of popular sports and a huge variety of betting markets. But, they will also get access to the diverse collection of Live Dealers titles such as the epic hits Mega Wheel and Sweet Bonanza Candyland. These are, of course, just some of the titles that will become available to Peruvian players at Pentagol. As you as well know, the developer launches brand new slots every month, up to seven titles, as well as bingo games, virtual sports products and the most innovative and exciting Live Casino games, so players on the platform are in for a real treat.

Pragmatic Play’s Latin American Operations VP, Victor Arias, said that Pentagol was the latest operator that everyone at Pragmatic Play was delighted to welcome as one of their valued partners. Arias added that the operator’s platform was perfect for Pragmatic Play’s content to gain an even stronger profile in the Peruvian market.

Pentagol’s Operations Manager, Jose Tornero, said that having the number of new titles that the deal brought to Pentagol’s players was immensely important to their growth plans and they couldn’t be happier to have partnered with Pragmatic Play. Tornero added that the developer’s games were a must-have for any Peruvian operator as players on the market insisted on getting the best titles possible at their disposal, and that was essential for the operator to remain competitive in the ever-growing market.