Evolution has made many exciting games over the years. The team built various exciting titles, including Crazy Time. That game and its many bonuses charmed numerous players. It is no surprise that one of those features would return eventually. What surprised us was how well Evolution could tie together many different elements into one enjoyable whole. 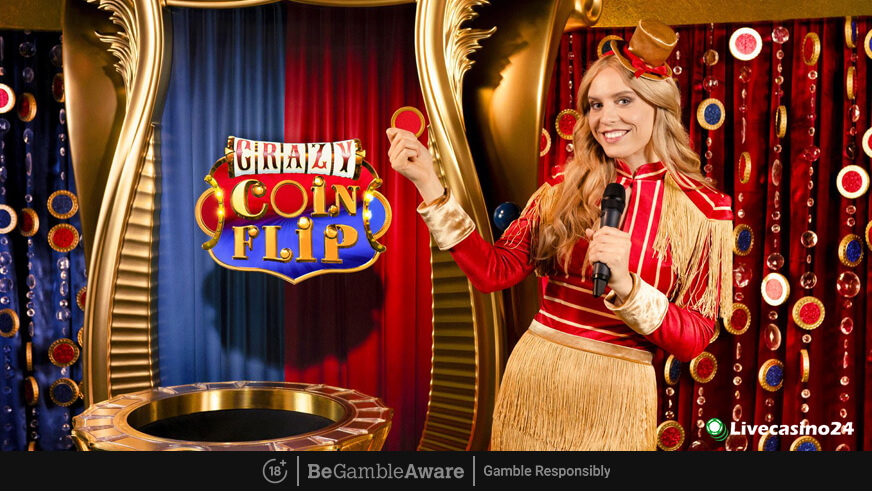 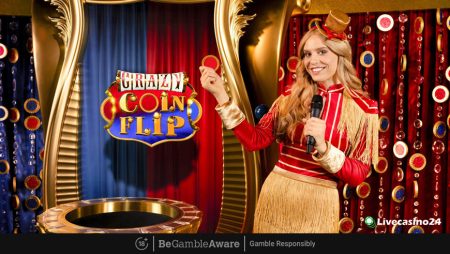 The developer combines details from several games. It has a bonus from Crazy Time, while Evolution’s Deal or No Deal Live inspires its qualifications and top-ups. Finally, Evolution leans into its newly acquired NetEnt expertise to make the qualification stage an engaging video slot.

How to play Crazy Coin Flip?

Crazy Coin Flip is a game made up of three parts. The first part is the video slot, which is the qualification phase. You play the slot game on a five-reel, three-row board with standard symbols and Scatters. You must land three Scatters on the playing field simultaneously to qualify for the next stage. Furthermore, some Scatters also appear with multipliers. These multipliers get added together to boost the multipliers in the bonus round if you qualify.

When you qualify for the round, you enter a Top-Up phase. This phase is played on a three-reel, three-row slot displaying only red and blue coins. Each coin appears with a multiplier value, whose size depends on your total bet. The more you wager, the higher the multipliers will go. Land three matching coins in the middle reel to win all the multipliers on the payline. The game adds these multipliers to the corresponding coins.

The Coin Flip bonus begins after the timer runs out on the Top-Up phase. Here, we see a host standing next to the coin flip machine, interacting with the players. Any multipliers gained so far will be applied to their respective sides of the coin. The host will then pull the lever, causing the machine to flip the coin. If it lands on the red side, you win the red multiplier. The blue side of the coin earns you the blue multiplier. After players receive the result, the round starts again with the video slot.

Given that qualifying for the bonus round is where all the big wins are, unlocking the Coin Flip bonus is essential. Evolution understands this well. That is why they give you a way to speed up qualification using different speed modes.

The normal spin mode plays at a standard bet level but does not offer enhancements. Meanwhile, XXXtreme spins guarantee one Scatter appears in every spin. It also increases the cost of each round by five times your base bet.

Unfortunately, we cannot employ many strategies when playing Crazy Coin Flip. The coin flip itself is 50-50, so you do not have any ways of affecting that. Similarly, slot games do not have strategies. You can only cross your fingers and hope you get the Scatters.

You can also use the Top-Up stage to increase the multipliers on the available coin values. We do not recommend spending too much money at this stage. While the game treats it as a must-play feature, it is acceptable to sit it out. After all, you do not control where the multipliers go.

If you like strategizing, Crazy Coin Flip is not your game. The variety of gameplay mechanics and features it offers makes it impossible to plot your way to victory. All you can do is watch the action unfold and hope Lady Luck smiles your way. In terms of entertainment, this release knocks it out of the park! Because of that, it has earned the livecasino24.com seal of approval.